In the outskirts of the Unimo we found something shimmering. Not like a star but something else. We where drawn to it like a moth to a flame. We soon discovered that it was a ice planet.

This planet of ice seems to be glowing, but don’t let it’s appearance fool you. This translucent exoplanet is merely reflecting and shattering light from distant stars. With temperatures close to -250° celsius this frozen landscape of volatiles such as water and methane and with lakes that seems to be made out of liquid nitrogen is the home to some of the cruelest beings we have come across so far. No one who has come within the planets gravitational pull has lived to tell the tale. We first thought this was a dead planet. But it did not take us long to realize that there was colossal hunters on this planet. Since they are totally blending in with their surroundings it’s hard, if not impossible, to know what’s just an iceberg and what’s an ice beast. The stealthy predators of this planet are not only fierce hunters but they also seem to have the ability to take control over your mind. Attempts have been made to send more drones but for several reasons we have stopped, we are simply afraid that it will backfire and we are not willing to take the risk. 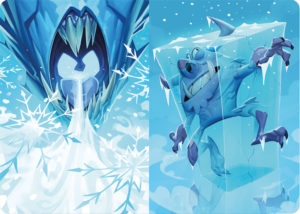